Part number: 9.1700.98.x01
The operation of the program is context-sensitive, i.e. by pressing the right mouse button there are menus displayed in a window, which allow specific settings.
Meteo-Online provides several options for configuration and start of the archive. Hours- as well as days-files can be written with settable averaging times.

Meteo-Online is divided into two programs:

These two independent programs exchange data, where the server has the function to pre-process the data from the connected instruments, to file and to provide them for the visualization (client). The visualization, on the other hand, inquires data cyclically from the server, and presents them in graphic form.

This concept has the following advantages:

The server is able to document data without visualization.

The server is able to administrate several terminals at the same time (limited only by the number of physical interfaces).

Server and visualization can run on different computers in a network

The server is started automatically on booting the PC, and documents the data in the background

The visualization is started only on request. 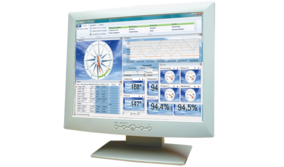 No accessories are available for this product.

Please use the form below for your inquiry or message.
Return to overview
THE WORLD OF WEATHER DATA

WE ARE MEMBER OF:

Adolf Thies GmbH & Co. KG ■ Hauptstraße 76 ■ 37083 Göttingen ■ Germany ■ Phone +49 551 / 79001-0 ■ Fax +49 551 / 79001-65 ■ info@thiesclima.com ■ www.thiesclima.com
Data protection settingsThis website uses cookies. Some of them are necessary, and others help us to improve this website and how you experience it.
I agree, and know that with effect for the future, I can change or cancel my consent at any time.
Further information  |  Individual cookie settings